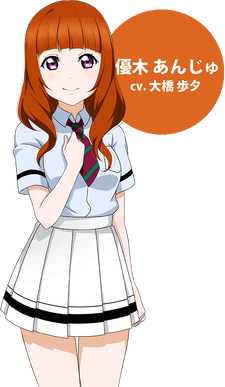 Anju Yuki is a supporting character in Love Live!. She was a third year student of UTX High School until she graduated in the anime's series finale, but still retained her status in Love Live! The School Idol Movie. She is a co-founder of A-RISE.

Anju is a third year student at UTX High School. Together with Tsubasa Kira and Erena Todo, they formed the school idol group A-RISE, which rose to popularity.

Anju behaves like a princess who possesses a sweet voice and she doesn't seem to worry much about A-RISE's competitions nor is she bothered whenever people ask for their autographs, even from their opponents such as Nico Yazawa and Hanayo Koizumi.

Anju has a slim figure with long, orange, curly hair with straight bangs and purple eyes.

The songs featuring Anju are: