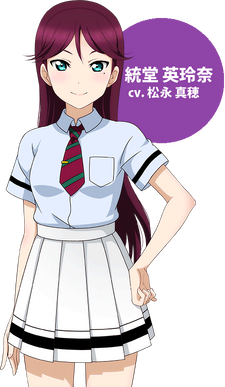 Erena Todo is a supporting character in Love Live!. She was a third year student of UTX High School until she graduated in the anime's series finale, but still retained her status in Love Live! The School Idol Movie. She is a co-founder of A-RISE.

Erena is a third year student at UTX High School. Together with Tsubasa Kira and Anju Yuki, they formed the school idol group A-RISE, which rose to popularity.

Erena seems to be the most matured one in A-RISE, indicated by her looks and height. She is respectful towards others and does not hide her admiration for other people. She also sees the opponents of A-RISE as equals and does not seem to look down on them. When meeting μ's for the first time, she praises every member of μ's and mentioned that pleasing their audience was what mattered to them now.

Erena has a slim figure with purplish red hair and teal eyes. She has a beauty mark under her left eye.

The songs featuring Erena are: