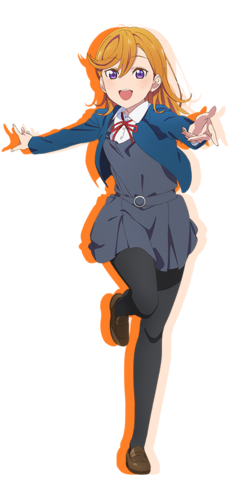 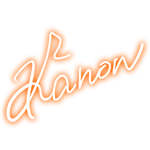 Kanon Shibuya is the primary protagonist in Love Live! Superstar!!. She is currently a second year student at Yuigaoka Girls' High School, initially being a first year in the first season. She is the leader and co-founder of Liella!. Her image color is marigold.[1]

While singing has always been her most cherished pastime, Kanon is more likely to be seen helping her mother manage the family cafe, serving customers their special baked apples with cream. Kanon's father works as a translator and her grandmother is from Spain, whose homemade paellas are one of Kanon's favorite dishes. As her home, Kanon has had many fond memories of the cafe, with much of her time there spent alongside her childhood friend, Chisato Arashi. Together they would often interact with Kanon's pet owl, Manmaru ("Roundy"), who now serves as the cafe's ever-popular mascot.

Kanon is seen as being somewhat shy and flustered, admitting that she is not good at communicating in front of others. However, while walking in town Kanon would often listen to music on her headphones, and would usually find herself singing the words to a song. Although she yearns to sing in front of people, Kanon is particularly nervous about doing so. Despite seeing herself as being very ordinary - having no particular talents or aspirations for her life - Kanon wishes to cheer people up through her favorite songs. Deciding to become a school idol was a way for her to do so, and to break away from merely seeing herself as simply "normal." But even though she thinks girly outfits are cute to look at, Kanon is a little shy and apprehensive about wearing anything too frilly or slightly revealing.

Her favorite saying is, "It's always sunny above the clouds."

Kanon, despite being more shy than previous protagonists Honoka Kosaka and Chika Takami, has nonetheless a natural charisma and people orientation. She is very kind-hearted, friendly, cheerful, passionate and supportive. She's a selfless and loyal friend, with sense of justice, and used to front bullies who threatened Chisato when they were children. She's shown to like animals, as seen when she plays with a stray cat on the street.

Despite her natural kindness, Kanon has a more boyish and blunt side, displayed when she's at home and in her more nervous moments.

Kanon has a slim figure with orange hair that reaches her shoulders and has purple eyes.

Kanon joined the school idol club with Keke Tang and she mentions her dream is to own a cat.

The songs featuring Kanon are: