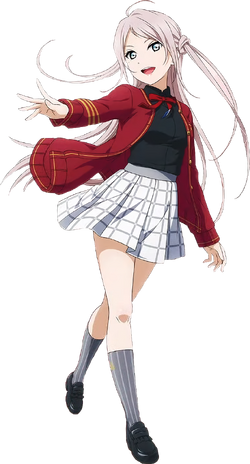 In All Stars, she was the leader and co-founder of the Association.

Lanzhu applied to Nijigasaki with her good friend Mia Taylor. She is childhood friends with the current student council president, Shioriko Mifune.

She was first introduced in Chapter 19 of the All Stars story and since Chapter 20, she is the leader of the Association, which she created as a way to help the members of the Club, which she admires greatly, to improve by working with professionals she hired. She initially banned the Club in order to force its members to join the Association but later allowed it to exist again in parallel with it until the latter's subsequent dissolution in Chapter 28.

In Chapter 29, Lanzhu apologizes to the Protagonist about her previous actions and officially joins the School Club as its 13th member and 12th school idol alongside Mia.[1]

Since she was a kid, Lanzhu was treated as a gifted girl due to her noticeable talents in many fields. However, this generated insecurity in her as she was always eventually left by others because she was treated as "special" and not as an equal among her peers.

Despite showing herself as a charismatic girl, her unique personality tends to catch others off guard by how demanding she can be with them so that they achieve excellent results like her, which leads her to make questionable decisions and to treat people in a way that usually makes them feel insulted. Even so, she doesn't hesitate to seek every possible way to befriend others.

While Lanzhu shows herself to be very competitive and somewhat arrogant in the anime, she doesn't appear as hostile and rude towards the Club as in the game.

Lanzhu has a slim figure. She has long pinkish platinum-colored hair that she styles into tied pigtails on both sides of her head and light greyish blue eyes. She has a beauty mark under her right eye.

The songs featuring Lanzhu are: