Japanese, English, Chinese (Simplified and Traditional), Korean, and Thai
Love Live! School Idol Festival ALL STARS (ラブライブ！スクールアイドルフェスティバル ALL STARS, Rabu raibu! Sukūru Aidoru Fesutibaru ALL STARS) is a rhythm action game developed for mobile platforms, based on the Love Live! and related franchises. It is published by Bushiroad and developed by KLab Inc., and was released on September 26, 2019. It was first announced at Tokyo Game Show 2017 on September 21, 2017. Prior to the announcement, it was first introduced and teased on March 30, 2017 as the PERFECT Dream Project in conjunction with SIF's 4th year anniversary.

Love Live! School Idol Festival ALL STARS was designed with "the greatest, best idol game" as its concept. Characters from μ’s, Aqours and Nijigasaki High School Idol Club appear within this game.

The members of μ’s & Aqours meet and support each other in the stories. Separate from the anime continuity, the two groups are in the same years of high school.[1]

Before the project was teased, a popularity poll started in SIF which asked the players to vote for their favorite N rarity members. Emma Verde took first place, Shizuku Osaka in second, and Kanata Konoe placed third. When the project was first teased, a preview image showed the silhouettes of the three girls with µ's leader Honoka Kosaka, Aqours leader Chika Takami, and Nijigasaki's soon-to-be members; Emma, Kanata, and Shizuku. After revealing the three winners, six more silhouettes were added as new characters.

Promotion for the game has involved the first official cross-generational interactions of Love Live! characters and actresses under the franchise's banner. The announcement at Tokyo Game Show involved not only the announcement of the Nijigasaki High School Idol Club's voice actresses but also Anju Inami (Chika) and surprise addition Emi Nitta (Honoka) as co-hosts – the first time Aqours and µ's actresses had shared a stage under the franchise banner. Later that same month during the Aqours 2nd Love Live! HAPPY PARTY TRAIN TOUR, two previews were released of all 18 combined members of Aqours and µ's addressing each other in chibi form going back and forth between the two groups.

On January 28th, an AbemaTV broadcast specifically promoting All Stars brought together three members each from µ's, Aqours and Nijigasaki. The hosts were the Aqours second-years' actresses – Inami (Chika), Rikako Aida (Riko) and Shuka Saito (You). Meanwhile, µ's was also represented by their second-years' actresses – Emi Nitta (Honoka), Aya Uchida (Kotori) and Suzuko Mimori (Umi) – while Nijigasaki was represented by the actresses for their Dengeki Online sub-team – Tomori Kusunoki (Setsuna), Miyu Kubota (Karin) and Mayu Sagara (Kasumi). The broadcast included original cross-generation voice dramas in the vein of what players could expect in the game stories.

On May 20th, three members of each group took part in a special panel at the SIF Thanksgiving Festival in Osaka, with the lead hosts being Aqours' Guilty Kiss actresses – Aida, Kobayashi and Aina Suzuki (Mari). For µ's, Nitta Emi and Mimori returned and were joined by Riho Iida (Rin), while Nijigasaki was represented by the actresses for their SIF sub-team – Maria Sashide (Emma), Kaori Maeda (Shizuku) and Akari Kito (Kanata). The panel included updates about All Stars' gameplay and storyline, including the first fully rendered performance for the game.

On September 20th, three groups took part in a special panel for Tokyo Game Show 2018: Emi Nitta was present to represent µ's, CYaRon! to represent Aqours, and all the members of Nijigasaki School Idol Club. They debuted the Opening movie TOKIMEKI Runners which included all the members of µ's, Aqours, and Nijigasaki School Idol Club. During the broadcast they mentioned that Love Live! School Idol Festival ALL STARS will be released in 2019. No additional details about the release month or day.

On May 30th, during the Love Live! 9th Anniversary Special Livestream, they have announced a collaboration single KOKORO Magic "A to Z" with CG animation PV for Aqours to be released on October 30. They also announced a Fall 2019 release window.

On August 17th, a video published on Love Live!'s YouTube channel announcing the opening of the game's official Twitter account as well as follow campaigns where winners can win up to 200 tickets for Love Live! Fes in January.

On August 18th, the game's official Twitter account started introducing the 27 characters, one character per day, starting with Honoka Kosaka and ended with Rina Tennoji on September 13th.

On September 4th, Love Live!'s YouTube channel published the in-game PV of Aqours' collab single, KOKORO Magic "A to Z". The CD/BD releasing on October 30th will contain a serial code for the game.

On September 9th, @LLAS_STAFF on Twitter published a video clip preview of the updated home screen interface and reiterated that more info will come during SIF's 6th Anniversary Thanksgiving Festival on September 21st and 22nd.

On September 13th, the instant win RT campaign began and will span until September 30th. Each day, @LLAS_STAFF will tweet a campaign tweet and by retweeting them, you will instantly receive a reply containing a video clip of a random in-game Kizuna story with the lottery result at the end of the video.

On September 17th, the release date was officially confirmed by the App Store to be September 30, 2019. Promotional images, PV's, and new reveals of initial UR cards for µ's members were shown as well, and pre-registration/pre-ordering pages were set up.

On September 20th, the release date is pushed ahead to be scheduled to be released on September 26th.

On September 22nd, it is announced there will be a global version of this game. Languages supported are English, Traditional Chinese, Korean, and Thai.

On September 26th, the game was finally released, two years after it was first announced.

On December 8th at CharaExpo USA 2019, they announced a Spring 2020 window for WW Version.

On February 12th, the release date was officially confirmed by the App Store to be out on February 25, 2020. Promotional images, PV's, and new reveals of initial UR cards for µ's members were shown as well, and pre-registration/pre-ordering pages were set up. 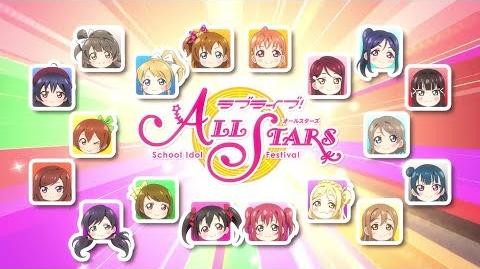 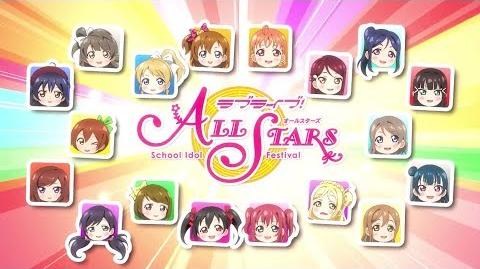 The January AbemaTV broadcast was subtitled in English by Team Onibe. Parts 4 and 5 of that broadcast include the Aqours first-years' and third-years' actresses in a contest to see who can cook fried rice and gyoza (Umi's listed favorite dish.) 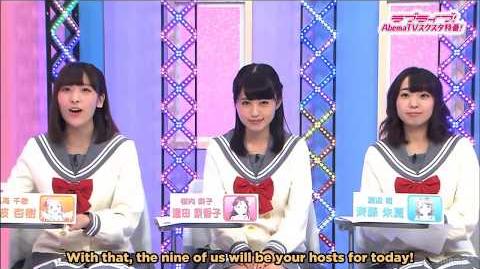 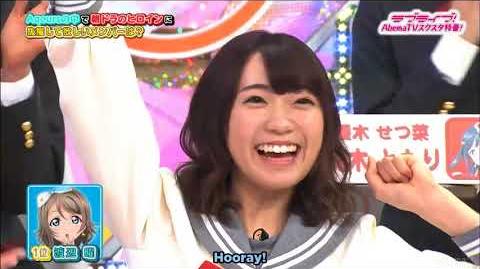 Practice in LLSIF All Stars Pt 1