Love Live! Sunshine!! The School Idol Movie Over The Rainbow

"Love Live! Sunshine!! The School Idol Movie: Over The Rainbow"

"Love Live Sunshine! The School Idol Movie Over The Rainbow" is an animated movie of Love Live! Sunshine!!, announced as part of "Aqours Hop! Step! Jump! Project". The movie premiered on January 4, 2019. The Blu-ray disc was released on July 26, 2019. The North American Blu-ray was released by Funimation on February 25, 2020.

Several years ago, a young Chika and You were playing on the beach when they came across a young Riko looking out to sea. The next scene picks up from the series finale ("Bokura no Hashittekita Michi wa…").

Following the closure of Uranohoshi Girls' High School, the members of Aqours vow to continue with just the six of them. On a search for a new place to practice, they visited their new school in the Numazu suburbs, only to see it in a decrepit state. As they gather in a nearby cafe to discuss their situation, they notice You talking to someone outside. The girls follow the pair in secrecy until Yoshiko blows their cover. You introduces them to the stranger, who turns out to be her first cousin Tsuki.

Tsuki, a student at the new school, explains that the transferees were being put in the so-called "branch school" for the meantime. In the main school, students were worried that the sudden influx would make its competitive clubs sluggish and the school's prestige lost. To help allay the students' fears, Aqours holds a live show but commits a basic mistake that makes them think about the group's future. That night, Chika and Riko agree to work hard for a live show that will reach out to those who misunderstand them.

The next day, the girls practice at the beach when Sarah and Leah, at Chika's invitation, dropped by. Upon being asked to watch their performance, Sarah is dismayed at how Aqours has languished since the third-years--Dia, Mari, and Kanan--graduated. Then, an enraged Leah lashes out at them. with Sarah explaining that her efforts to start a new school idol group hasn't gone as she hoped. Suddenly, a familiar helicopter makes a low flyby, knocking everyone on the ground. However, the passenger isn't Mari but her mother.

At the Awashima Hotel, Mari's mother informs the girls that the third-years have gone missing during their post-graduation trip in Italy. Sarah urges Aqours to go, believing that talking to the third years will help them reach closure. Unknown to them, Mari's mother's wry smile hides her true intentions for sending them.

With Tsuki--who grew up in Italy--as their guide, Aqours makes their first stop in Venice based on a photo of a canal where the third-years last went.  A mysterious call from a nearby phone booth soon leads them to the Contarini del Bovolo, where they reunite with the third-years. Their reunion is cut short when a group of tourists identify the third-years from the poster. Mari throws a uniform off the building, prompting You and Tsuki to jump off to catch it. Chika and the girls catch them just in time, but the third-years use the confusion to escape ("Tousou Meisou Mobius Loop"). Inside the uniform, however, You finds a card with a message in Italian, presumably written by Mari: "When Yohane looks upon the land that she protects, the fairies will lead the way."

With "Yohane" referring to Saint Giovanni, the group later travels to Florence. They follow a purple flash seen from the Florence Cathedral's cupola to the third-years hideout, a mansion owned by a friend of Mari. Gathering once more, the third-years reveal that Mari is getting married; in doing so, Mari's mother would take away her daughter's freedom and keep her away from Dia and Kanan. Mari's mother eventually tracks them down and a confrontation ensues. Mari vehemently insists that her time spent as a school idol wasn't a waste of time and sets out to prove it. Several days later, they perform at the Spanish steps in Rome to a sizeable crowd ("Hop? Stop? Nonstop!"). Seeing her daughter's resolve, Mari's mother finally admits defeat and leaves.

As a full nine, Aqours returns to Japan. At Mutsu and company's request, they went to the decrepit school to discuss the details of Aqours' upcoming live show. Yoshiko's middle-school friends, also ardent followers of Yohane, from the main school express their intent to help. That night, Chika receives a call from Kanan.

The next day, Kanan learns through Sarah about Leah's plan to join Aqours in time for the school opening. Initially, the members welcome the decision but Ruby protests believing that it's not what Leah really wants. Ruby reminds them of the time Leah promised to start a new group after Saint Snow's disbandment. They plan a joint live show, "the final round of Love Live," via livestream to help rekindle Leah's fire. The Kazuno sisters perform as Saint Snow one last time ("Believe again") with Aqours watching from Numazu; and Aqours performs as a group of nine one last time ("Brightest Melody") with Saint Snow watching from Hakodate. Inspired by the radiance of the school idols, Tsuki shares the livestream on the Internet.

With less than two weeks before the big show, the Uranohoshi students get to work preparing the stage and performance ("Kiseki Hikaru").  Soon, Tsuki leads her schoolmates, once distrustful of the transferees but inspired by the livestream, to help with the final leg of the preparations. Heading home, Aqours meets up with the third-years, who agree to stay for the first half of the show. Together, they make an impromptu visit to their old school.

On the day, the performance is attended by thousands, including the main school's students and their parents. A third of the way into their song ("Next SPARKLING!!"), the third-years leave. In a series of in-credit insets, Leah continues recruiting members for her new group and the dilapidated school is finally closed, with the Uranohoshi students integrated into the main school.

In a post-credits scene, a group of girls gather at the beach discussing the concert in Numazu that they had watched recently. One of them asked what was the name of that group that performed and one girl answered written in sand: "Aqours," 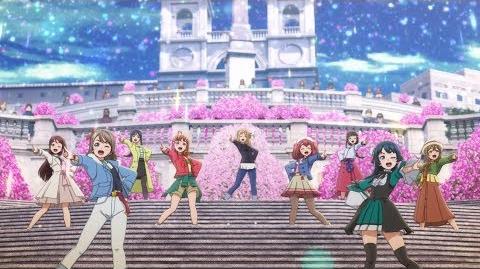 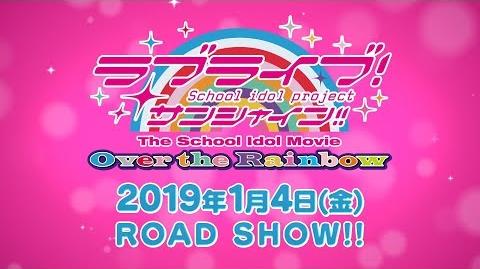 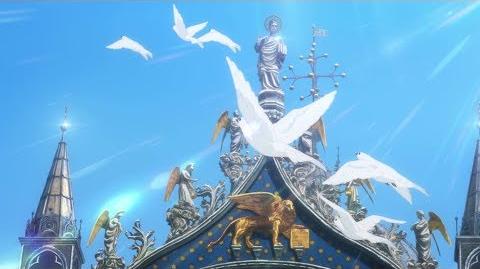 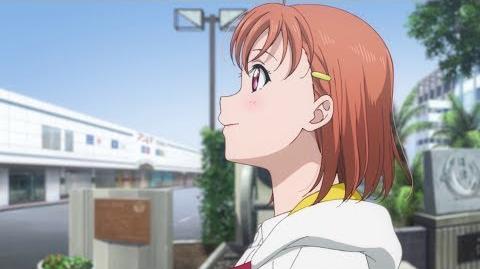 italicized lines are from the Japanese theatrical release.

Changes in the BD/DVD releases

EDITOR'S NOTE: Keep in mind that the changes below are from the comparison between the Japanese theatrical release (the camrip video is provided by an unknown source, but let's not go there) and the Blu-Ray/DVD home releases.