Love Live! Nijigasaki High School Idol Club (ラブライブ！虹ヶ咲学園スクールアイドル同好会, Rabu Raibu! Nijigasaki Gakuen Sukūru Aidoru Dōkōkai) is an anime television series, produced by anime company Sunrise in association with the music label company Lantis. It began airing in Japan on October 3, 2020 and is being simulcast by Funimation and Crunchyroll. The first season concluded on December 26, 2020 with a total of 13 episodes. On May 9, 2021, during Day 2 of Love Live! Nijigasaki High School Idol Club 3rd Live! School Idol Festival ~Yume no Hajimari~, the second season was announced. On October 3, 2021, the second season was announced to be airing in April 2022. The second season began airing in Japan on April 2, 2022. 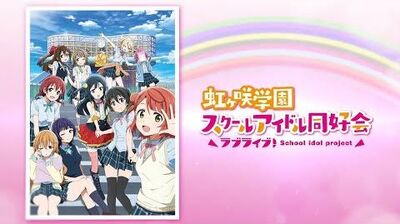