Nijigasaki High School also known as Nijigasaki Academy is a high school located in Odaiba, an artificial island in Tokyo, Japan. This is the school where the members of Nijigaku go to.

The Nijigasaki Academy consists of a middle school and high school in the Odaiba area. The school also has an associated set of dorms for students, which are not required.

The school aims to foster world-class specialists in various fields, and as such has many areas of study and specialized departments not found in other schools. The school encourages the independence of students. The school in the game is currently headed by Lanzhu's mother, while in the anime, it's currently unknown.

The summer uniform is a vest-style uniform. The skirt is navy blue with a printed white grid. A light-blue button down is worn under a white or navy blue vest. Students may choose to wear a jacket instead of a vest, or just a button down.

The winter uniform is a blazer-style uniform. The skirt is white with a printed gray grid. A dark gray jacket is worn over a white button down, though students may wear a different jacket, and choose to leave it open or closed.

Like Otonokizaka and Uranohoshi, the students appear to be free to customize their uniforms as seen Rina with thigh-high socks, Kasumi, Ai and Kanata with a cardigan, and Karin with black tights.

Years are differentiated by a ribbon tied under the collar of the button down. First years wear a yellow ribbon, second years wear a red ribbon, and third years wear a green ribbon. The summer versions of the uniform have ribbons of these colors, but slightly lighter.

The official school badge for Nijigasaki is being chosen through a contest. 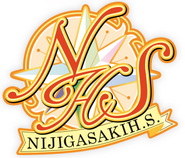