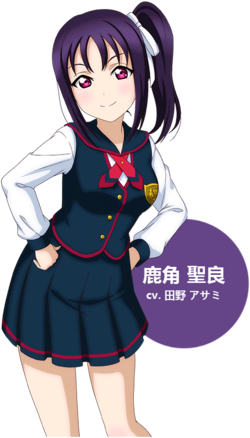 Sarah Kazuno is a supporting character in Love Live! Sunshine!!. She was a third year student of Seisen Girls' Academy until she graduated in the anime's series finale. She was the leader and co-founder of Saint Snow until its disbandment on the ninth episode of the anime's second season. Her image color is sky blue.

While singing, Sarah is the lead vocalist. Sarah is also the lyricist and the composer of the songs for Saint Snow.

Sarah possesses an outgoing personality, usually speaking on behalf of both of Saint Snow's members in its exchanges with Aqours.

Despite her being the more hospitable of the Kazuno sisters, Sarah maintains her sense of combativeness through asserting control over conversations she engages in. Her competitiveness is also highlighted in her sole desire to win the Love Live!. She believes that, through reaching the same ends which A-RISE and µ's arrived at in the Love Live!, victory in the Love Live! would give her insight into the qualities that made the two idol groups.

Much like her younger sister, Sarah displays a high level of conviction for Saint Snow's cause. Despite complimenting Aqours for their performance at the Tokyo idol event, it is revealed through Leah's comments that Sarah belittled Aqours' performances for being child's play, and would rather they give up on winning the Love Live!.

Sarah carries herself with a sense of self-assurance as well, boasting of Saint Snow's performance before Aqours in the lead-up to their performance at the Tokyo idol event.

Sarah is tall with a slim figure with purplish indigo hair that she has tied in a ponytail on the left side with a white ribbon and crimson eyes.

The songs featuring Sarah are: