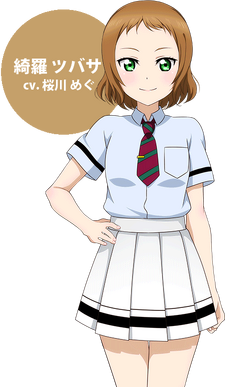 Tsubasa Kira is a supporting character in Love Live!. She was a third year student of UTX High School until she graduated in the anime's series finale, but still retained her status in Love Live! The School Idol Movie. She is the leader and co-founder of A-RISE.

Tsubasa is a third year student at UTX High School. Together with Anju Yuki and Erena Todo, they formed the school idol group A-RISE, which rose to popularity.

Tsubasa is humble yet competitive. Despite A-RISE's popularity, she admits that she wasn't interested in it nor does she seemed concerned losing the popularity their group has achieved. She never seems to look down on A-RISE's opponents, especially μ's whom she praises and respects. Though she admires them, she says that A-RISE won't lose.

Tsubasa is short with a slim figure and short, golden-colored hair that reaches her shoulders and has green eyes.

The songs featuring Tsubasa are: