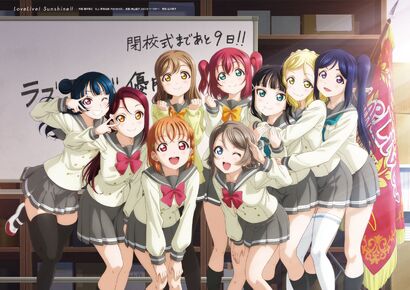 Heya!!! I'm CureHibiki, but please just call me Hibiki! I was introduced to Love Live when START:DASH!! was continually shown in my recommended section on YouTube. I started out with Love Live! by listening to their music and eventually got into their anime after a 3rd try just as µ's was entering their final year as idols together. In all honesty, as much as I love, µ's, I really adore Aqours more as I was there from the second they were introduced and hope to the Love Live! gods that they stick around for several more years. My favourite sub units are BiBi and AZALEA but I do love the other sub unit's songs as well!!

There's something about her that is just so, sweet. Sure she is a bit of a tsundere but I love her none the less as she seems to really care about the other members despite trying not to show it, and her love for music is as huge as mine. To some it up, I relate to her a lot. Oh and don't get me started on her voice.

Holy smokes isn't it gorgeous? Pile sure can sing and does such a great job performing as everyone's favourite tsundere princess. Her solo song, Daring!!, is also pretty good for having K-POP influences. Despite it not being my favourite solo song from the franchise, I respect it even though I wish Maki could have had a second solo.

And from Aqours, the honor of best girl goes to Kanan Matsuura. Lemme be honest here... Kanan did not start out as my best girl. In fact, she wasn't even on my radar until HAPPY PARTY TRAIN was announced. I never disliked her, she just had no screentime which made me ignore her. But enough about why I never noticed her, how about why I love her so much now? Well first off, even tho I relate to Maki, I also relate to Kanan. I put others before myself a lot and always hope they go achieve the future that will benefit themselves but unlike Kanan, I wouldn't force them, haha. And just Kanan's maturity and silent nature and actions are pretty similar to me. Oh and she's so cute when she's scared of the dark and heights. Thank you season 2 for letting us get to know Kanan more!

Her singing voice is really cute too! Yeah, she isn't as great as the other eight members of Aqours but she can sing, Lantis just chooses to give Kanan the lines that don't make her voice shine. Thankfully, Lantis did the right thing and her solo, Sakana ka Nanda ka? really fit her tone and personality so well!!! Oh and Nanaka Suwa is just adorable. I'm so glad I started paying attention to Kanan cause omg Suwawa is such a cutie!!! Have you seen her pouts???

Community content is available under CC-BY-SA unless otherwise noted.

Ranked #5
on this wiki