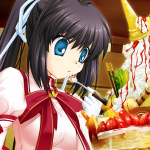 Her overflowing intelligence and straight-up honesty

Just a little bit about myself, I've been a Love Liver! for some time now, ever since June 2013. Love Live! was the one time I ever picked up a fandom in my life which is why I follow it so fervently. Seeing Emitsun smile at me up close at AFASG 2013 made me swoon, and 8th February 2014 was the first time I ever kyaaa-ed so hard when I attended the live-screening of their 4th live. I'm a 2.5D fan, meaning I follow both the 2D and 3D aspects of the project.

Ever since I started it's been a slew of experiences, both with the official content as well as fandom things. I've managed to catch every live since the 4th so far mostly through live-viewings in Singapore, but Aqours 2nd Live was the first time I was actually at the venue itself for both days and there's probably no turning back from that. The community we've founded in Singapore is great, but meeting people from all around the world is even better, not to mention getting to see the seiyuus with your own eyes.

On the fandom end I created an extensive number of pages, but my greatest work would probably be the Wikia Twitter, which I grew from 700 followers of SIF news to where it is now. It was the first information account pushing out news in English with minimal lag-time, and still aspires to maintain that position.

Used to put a lot more time into translations for the Wikia but have since levelled off, now focusing on management of the Wikia Twitter and other related assets instead. Currently working so haven't been able to invest as much time into creating new content but still around to manage things.

Schoolido.lu Profile: LuciaHunter
Been playing on the JP server since June 2013, and sticking to only 500-yen packs at most. I don't like grinding for events either so I am usually content with going as high as my naturally-regenerating LP can reach without using LoveCa Stones. This also keeps me from burning out: after having played this game for three years, it gets real old real fast no matter how many new features they push out.

I believe in the luck of the draw and that saving LoveCa for draws is a better option than grinding in events. 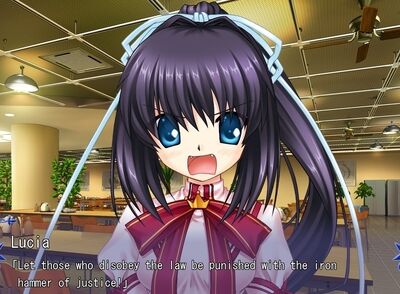 Here's Konohana Lucia from Rewrite, a visual novel by Key. She's my namesake who largely shares the same personality: tsundere, protective of friends and with a strong feeling of justice.

Which is why this quote is here, because as it turns out I'm the one enforcing the harsher rules most of the time to protect the other users of this Wikia, and sometimes the other admins from having to dirty their hands. So behave by the rules, people, or face the iron hammer of justice.

Retrieved from "https://love-live.fandom.com/wiki/User:LuciaHunter?oldid=36664"
Community content is available under CC-BY-SA unless otherwise noted.