This article is about the episode. For other uses, see Wonder zone (disambiguation).

Wonder Zone (ワンダーゾーン, Wandā Zōn) is the ninth episode of the Love Live! School idol project anime series. It was aired on March 3, 2013.

The success of the open day brings the faculty to reconsider the closing of the school, as well as earning the group an expansion to their club room. After the group discovers they reached 50th place in the rankings, they visit Akihabara where they find they are already being featured on merchandise. Upon discovering a photograph of Kotori in a maid's outfit among the goods, they learn that Kotori has been secretly working part-time at a maid café after school to build her confidence, and is known as the "Legendary Maid Minalinsky" in Akiba.

Eli decides Akihabara would be the perfect place to hold a live performance, and assigns Kotori to write a song about Akiba culture. However, Kotori struggles with coming up with lyrics, which soon has an impact on her studies. In order to help her out, Honoka and Umi join her at the maid café.

Recalling the feelings she gets whenever she works in Akiba, Kotori is able to come up with some lyrics which help make the performance a success. After visiting a shrine, Honoka assures Kotori and Umi that they'll be together forever. The next morning, however, an air mail letter arrives in Kotori's postbox the next morning with her name distinctly written on it.

Since the end of the previous episode, What I Want To Do Is..., Season 1 Episode 8, all nine members of μ's have been fully assembled. The following is the list of members of μ's by order of admission. 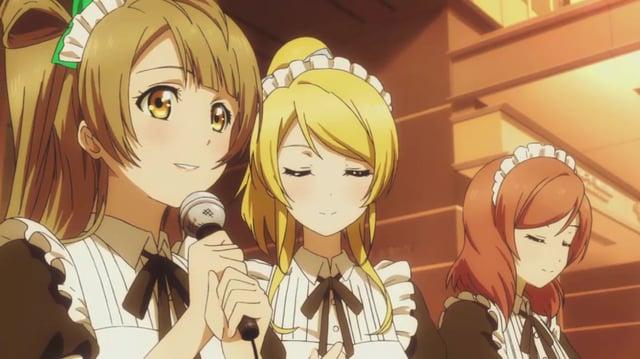