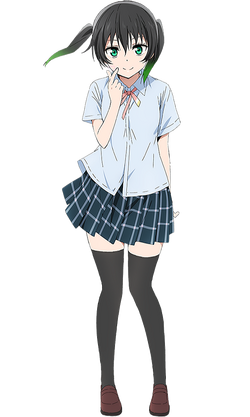 She also served as the adaption's representation of the player character in Love Live! School Idol Festival ALL STARS.

Yu is the budding school idol enthusiast of Nijigasaki High School, and is often seen with her characteristic thigh-high socks and twin-tails tips dyed green. She is Ayumu Uehara's inseparable childhood friend, having grown up as neighbors in the same apartment building near Odaiba. Eventually, the two of them ended up at Nijigasaki together and are now classmates. Yu's love for school idols blossomed after seeing a performance of the legendary school idol, Setsuna Yuki. Along with Ayumu, Yu's very first experience of school idols that day would lead her to seek out Nijigasaki's School Idol Club.

Yu adopted a lot of the player character's personality prior to the anime. She is described as insightful, reliable, quick to take action, and very caring of the Nijigasaki idols. She is shown to have a deep passion for idols, which inspires her goals and actions just like her game counterpart.

Yu has a slim figure with medium black hair with green tips that she has tied into twintails and has green eyes.

As she doesn't appear in the ALL-STARS illustrations due to being a separate character from her original counterpart, Yu only appears in illustrations and other published media that is tied with the anime timeline.

Even though she is the anime equivalent of the Love Live! School Idol Festival ALL STARS player, there is a debate about whether she is the true POV protagonist of the game, as many English-speaking players commonly inferred the player as her (mainly due to the international version of the game explicitly refers to the player character as such by several characters) though her unique personality may clash with the player's featureless characteristic.